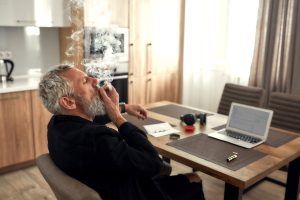 New research has revealed that marijuana users may be more at risk for a dangerous complication if they have a rare stroke called aneurysmal subarachnoid hemorrhage (aSAH). This relationship sees recent marijuana users as more than twice as likely to suffer these complications from a bleeding stroke.

The study published in Stroke is the largest to examine the impact of THC (Tetrahydrocannabinol), the psychoactive component of marijuana, on complications after an aneurysmal subarachnoid hemorrhage, a rare but severe form of stroke.

The non-invasive procedure included threading a slim tube through a blood vessel to the aneurysm’s base and releasing coils that fold to fill in the space and provide a barrier to stop further bleeding.

Urine toxicology was used to test for THC, reflecting cannabis exposure within three days for a single-use to approximately 30 days for frequent heavy use. The recent cannabis users did not have significantly larger aneurysms or worse stroke symptoms. They were also not more likely to have high blood pressure or other cardiovascular risk factors than patients who tested negative for THC.

With these conclusions, study authors suggest that: “When people come in with ruptured aneurysms, and they have a history of cannabis use or are positive on a toxicology screen, it should raise a red flag to the treating team that they are at higher risk of vasospasm and ischemic complication.”

This study does not address how cannabis raises the risk of complications, so more research is needed to investigate the exact cause of vasospasm further and delayed cerebral ischemia. Given the increasing popularity of marijuana, it is vital to evaluate the risk and benefits.

Heart health is essential for both marijuana users and non-users and should not be overlooked. Whether you are at a higher risk for heart attack or stroke or not, experts agree that taking action to ensure a healthy heart is essential.

Heart Rescue is an excellent addition to a daily routine to help support and maintain cardiovascular health. It was designed using various ingredients, including
omega-3 fatty acids, CoQ10, magnesium, and hawthorn extract. This unique blend of ingredients can help to reduce the risk of heart disease, strengthen the heart muscle, and maintain healthy cholesterol.