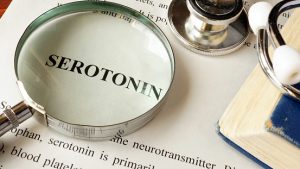 Serotonin is known for being a neurotransmitter found in the brain that’s involved in sending signals between nerve cells. However, the chemical can also be found in the gastrointestinal tract and in blood platelet cells. We do know that serotonin is a contributor to feeling good, and that low serotonin is often associated with poor moods and depression.

About 90 percent of serotonin levels found in the human body are located in the GI tract and are involved in regulating bowel movements. The remainder is located in the central nervous system, where it has several functions including regulating mood, appetite, memory, learning, social interactions, sexual desires, and sleep.

Serotonin is often called the “happy molecule,” as several studies have found it releases during positive moods.

However, serotonin has a multitude of different attributes unrelated to the brain. It can affect the cardiovascular system, the endocrine system, and our muscles. It has even been found to contribute to the regulation of breast milk production. Having a serotonin deficiency can produce abnormal outcomes in all of the domains it affects.

The following are some causes of serotonin deficiency:

Vitamin B6 deficiency: Pyridoxal-5-phosphate, commonly known as vitamin B6, is important for the synthesis of serotonin from tryptophan. If low levels are found in the body, it will affect serotonin production overall. The amount of vitamin B6 regulates the amount of serotonin that is synthesized.

Low dietary levels of L-Tryptophan: Serotonin is synthesized from an amino acid called tryptophan. When tryptophan levels are low relative to the concentration of other amino acids such as leucine, isoleucine, and valine, only a small amount of serotonin is produced. Foods rich in L-tryptophan include meat, poultry, nuts, and dairy products.

Competing amino acids: Tryptophan has been observed to enter the brain with studies suggesting that a diet high in protein and low in carbohydrates may cause an imbalance of amino acids, leading to reduced amounts of tryptophan that enters the brain due to decreased tryptophan production.

Theanine: An amino acid that is present in great tea leaves. It has the ability to cross the blood-brain barrier, entering the brain. Theanine can inhibit brain neurons that are responsible for the release of serotonin.

Considering how many processes serotonin is involved in, having abnormal level can lead to a multitude of different symptoms. The following is a list of the various symptoms you may experience with low levels of serotonin:

Anxiety: While serotonin is not the only neurotransmitter involved in anxiety production, low levels of the neurotransmitter tend to be associated with a person’s anxiety. Increasing serotonin levels can help curb anxiety, as seen with the various medications used to help treat the nervous disorder.

Carbohydrate cravings: Carbs are known for having an indirect effect on serotonin levels. This is primarily due to the fact that ingesting carbohydrates allow tryptophan to be more available to be converted into serotonin.

Cognitive impairment: Serotonin is known for playing a role in cognitive functioning, as low levels are associated with poor memory consolidation.

Depression: Low levels of serotonin have been linked to some cases of depression, as many of the medications used for its treatment help increase serotonin levels in the brain.

Digestive problems: Studies have shown that serotonin plays a role in the development of irritable bowel syndrome, with increases in serotonin levels helping correct the condition. Normal levels of serotonin help to promote healthy digestive function.

Emotional sensitivity: Low levels of serotonin may cause people to become easily offended by jokes or personal attacks. This may also be compounded by low mood.

Fatigue: Feelings of lethargy or tiredness could be a result of low serotonin levels. This symptom commonly occurs upon the discontinuation of serotonergic medication and persists until serotonin levels replenish.

Headaches: Low levels of serotonin have been linked to headache development with severe forms often finding relief once a person increases their serotonin levels.

Insomnia: Melatonin is a substance in the body that helps promote sleep, and serotonin is involved in this production. Having low levels of serotonin can lead to low levels of melatonin, and therefore, the inability to fall asleep.

Light sensitivity: This is the feeling of pain or irritation when viewing bright light directly. This level of sensitivity may signal a possible decrease in your serotonin levels. Serotonin is known for improving mood and helping to keep us calm, which is possibly the reason why we may feel bothered by light at with low serotonin levels.

Low self-esteem: Low serotonin may be a contributing factor for feelings of low social confidence. This is thought to be so as those taking serotonergic antidepressants often feel more confident and social.

Mood swings: Aggressive behavior or emotional sensitivity in social situations may both be contributed by low serotonin levels.

Obsessive thoughts: These are often obtrusive thought processes that make the individual feel trapped by their own unconformable thinking. This type of thought processing is often observed in those with obsessive-compulsive disorder (OCD), which makes this feel like a compulsion to act out their obsession. This is linked to low serotonin levels.

Overeating: This is related to carbohydrate cravings. Low levels of serotonin may make a person feel depressed and/or anxious, which may cause them to overeat.
Social withdrawal: This means that person chooses not to join social events and isolates themselves from others. Having low levels of serotonin can cause these type of symptoms, as even moderate levels of serotonin are known to promote social interaction and relieve social discomfort.

Sound sensitivity: A possible side effect of low serotonin and can affect people at any sound range. Modest or even low decibels can bother people with lower than average levels of serotonin. Sound sensitive can produce feelings of stress and uncomfort.

Suicidal thoughts: Often a feature of depression, suicidal thoughts can be a result of having low serotonin levels. This is a common occurrence in those being treated with antidepressant medication who abruptly stop taking them.

Weight gain: Related to the craving for carbohydrates that low serotonin levels often produce, weight gain is an expected result for those who eat too many carbs.