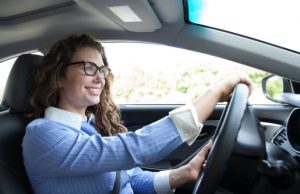 The research was conducted at a state-of-the-art driving simulator at the Mercedes-Benz Center. The participants were six individuals with glaucoma and binocular vision loss who all partook in the driving simulation. The simulation had close to real-life conditions with 360-degree visual projection, a real car and a moving base.

The test was 40 minutes long and the participants encountered a variety of traffic situations and hazardous situations. One example was a pedestrian suddenly appearing behind the parked car. If participants failed any one of the nine hazards presented, they automatically failed the whole test.

For comparison, eight normal participants also took part in the simulation. Head and eye tracking information was also recorded from both groups.

Half the glaucoma patients passed the driving test with performances that were impossible to differentiate from the control group. Those who passed showed an increase in visual scanning and exploration, which means they made more head and eye movements in comparison to those who failed. Dr. Enkelejda Kasneci, lead researcher, said, “Such behavior indicates an increased scanning activity in glaucoma patients who passed.”

Although the sample size was small and vision loss varied among participants, all glaucoma participants were ineligible for a driver’s license in many European countries.

Dr. Adams added, “For these patients, their successful adaptations appeared to involve making increased numbers of head and eye movements to the location of objects in what would normally be their peripheral vision.”