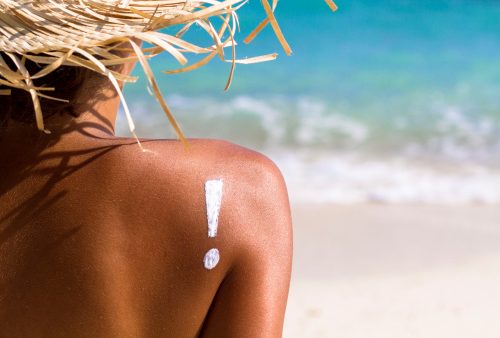 Basking in the sun feels great—it boosts mood, can help treat depression and even aids with the production of vitamin D in the body. However, too much of a good thing can be bad, as being exposed to too much ultraviolet radiation (UV)—a form of light produced by the sun and tanning bed—can lead to melanoma, the most serious type of skin cancer. In addition, new research has identified proteins that are involved in the skin cancer process, potentially advancing cancer treatment in this field.

Melanoma develops in melanocytes—the cells that produce melanin, the pigment that gives us our skin color. Any part of the skin that has contact with the sun has cancer risk potential, but melanoma may also form in the eyes and rarely in the intestines and other internal organs. The precise cause of melanoma isn’t entirely understood, but it is known that limiting UV radiation exposure can help reduce the risk. Oftentimes, the first signs of skin cancer will be the development of an irregularly shaped mole on the body, but sometimes it can occur on otherwise normal-appearing skin. It is thought that DNA damage in skin cells is what leads to mole formation, but it isn’t entirely clear, as a combination of environmental and genetic factors may play a role in cancer development. The following are risk factors for melanoma cancer development:

The new research in question used mouse models to help study this complex disease, but the researchers stress that mouse melanoma is far less complex than its human counterpart. They used this to their advantage to better study key histopathological features of the human disease by identifying a dozen new genes in rats that are likely to play a key role in the development and progression of human melanoma. They identified one gene called FES, establishing it as an important contributor to both mouse and human melanoma.

The FES gene was previously found to be able to transform normal cells into cancer cells under certain conditions, but its role in melanoma was found to be very different.
“To our surprise, we obtained clear evidence that FES strongly suppresses melanoma growth and viability. Its expression is silenced in more than 30% of human melanoma lesions. Importantly, we showed that FES deletion in mice accelerated the growth of melanoma tumors,” said, Prof. Jean-Christophe Marine.

The researchers go on to say that this gene modulated the WNT signal pathway—a key cancer pathway that is activated in virtually all cases of melanoma. Despite this pathways recognition, researchers are still unsure of its mechanisms for cancer activation, with the FES gene now known as one route for activation in about 30 percent of cases. This identification opens the doors to the possibility of new treatments that activate the FES gene helping treat melanoma.

“We will definitely further explore this new putative therapeutic strategy. Importantly, in the same time, our data raise concerns about ongoing clinical trials with broad-spectrum tyrosine kinase inhibitors. Some of these inhibitors inactivate FES and therefore may lead to undesired effects.”