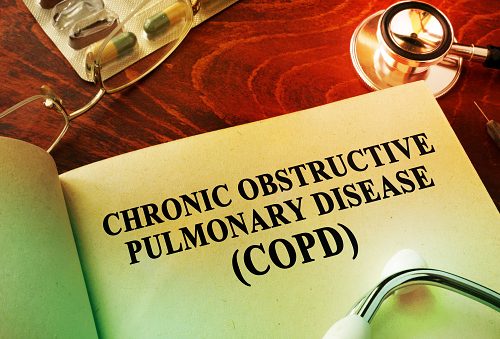 Smoking is often attributed to increased lung cancer risk, and this is not an incorrect assumption. But there is a condition that severely affects smokers called chronic obstructive pulmonary disease (COPD). Cigarette smoke irritates the linings of the respiratory system leading to increased inflammation and difficulty breathing. It is considered the third leading cause of death in the U.S. as of 2010, with smoking linked to about 80 percent of all COPD deaths. However, according to a new report, death rates for this debilitating disease are seeing a drop in American hospitals.

COPD encompasses two other conditions, chronic bronchitis, and emphysema. In most cases COPD is diagnosed much later in a smoker’s life as symptoms are initially subtle. Long-term exposure to irritating gases or particulate matter, both found in cigarette smoke, lead to inflammation of the respiratory linings of the air sacs in the lung and other structures of the respiratory system. The following are various symptoms of COPD:

Despite the fact that smoking is a relatively common habit held by many, new research finds that hospital admission rates for the disease are remaining steady, with the number of patients dying as a result of COPD actually seeing a decline over the last 10 years.

This is good news, as medical professionals find COPD difficult to treat.

This finding comes after an analysis that looked at 2005 to 2014 data collected from a major survey of hospitalized patients in the U.S. Researchers found that nearly 8.6 million Americans with an average age of 67 were admitted to hospitals with COPD during that time frame, which remained relatively constant.

The biggest surprise was the annual death rate of COPD patients while in the hospital, which saw a huge drop of 62 percent over the same period. The rate of death went from a high of 24,000 to just over 9,000. This statistic translated across all racial groups as well.
While this is good news overall, a disparity was seen when comparing men versus women. It was observed that women were both more likely to be hospitalized and more likely to die from COPD than men. Women accounted for up to 58 percent of hospitalization and 55 percent of inpatient deaths.

Medical expert suspect this trend may be due to the growing number of women smokers, the increased severity of symptoms, and also longer life expectancy that women tend to have over men.
“Many do not realize that COPD accounts for more deaths in women than breast cancer and lung cancer combined,” said Dr. Steven Feinsilver, a pulmonary expert.

Despite this, medical professionals that are involved in COPD care find significant decreased in mortality “extremely gratifying”. They attribute this positive trend to improvement in technology, as well as advances in fighting infections, clotting, and other complications.